Elephants have killed about 60 people and injured 50 in Zimbabwe this year alone, and the need to find ways of reducing or eliminating human-animal conflict is intensifying.

In Matabeleland, in the Zimbabwean midlands, Peter Makumbe, a PhD student at Nelson Mandela University, and Professors Herve Fritz and Jan Venter, supported by Oppenheimer Generations Research and Conservation, have embarked on creating a hotspot map of human-elephant conflict zones, by combining technology and on-the-ground knowledge. It is hoped that this will set up an early warning systems for communities at risk of crop losses, injury or death, and so defuse conflict between people and elephants in African savannas.

Zimbabwe has an elephant population of over 100 000, the second-largest in the world after Botswana. In north-west Matabeleland there are approximately 50 000 elephants, but Makumbe’s research is focused on the corridor between Hwange National Park, and the property Shangani Holistic, where he is based. Shangani is owned by the Oppenheimer family and practices a holistic management style to sustainably manage cattle, wildlife and people together.

Elephants, Makumbe points out, are free roaming. There are no fences around protected areas, he says. “It is people who recognize boundaries, not elephants”.

Every year in April and May between 250-300 elephants head from Hwange to Shangani. On their way they pass through state protected forests, and a community which forms Makumbe’s special area of research.

Makumbe says the increasing numbers of elephants create problems, especially as they range beyond protected areas, increasing the likelihood of conflict.

“The conflicts is competition for resources,” says Makumbe, and the main area of competition is over crops. “Elephants raid impoverished people’s crops”, creating fears over immediate loss of income and long-term fear of food insecurity.

To prevent crop destruction, communities tend to resort to two main measures. The first is to plant chilli around crops or to put chilli in oil in bottles around the fields. “The people I have interviewed say this is effective for one or two years, but then the elephants eventually jump over the obstacles,” says Makumbe.

The second prevention measure is more active, and involves making a noise, by beating drums for example, to scare the elephants off. “This is effective but dangerous,” says Makumbe, as over time the elephants lose their fear, charge and attack people, causing some fatalities.

Makumbe says that understanding the crux of human-elephant conflict is the first step towards the coexistence of communities and these giants, but exactly where and when these conflicts occur has not been sufficiently investigated. Makumbe’s research involves  fitting some elephants with satelitte collars which l allow tracking by giving a location signal every hour. The placement of collars was originally a Shangani initiative to understand migration patterns and understanding all male social systems, but tracking elephants in this way will also allow researchers to determine the time and place of conflict incidents, and by combining the two produce a map of the most problematic areas and time of year when conflicts are high. Crucially, the location tracking provides an early-warning system by which Zimbabwe Parks and Wildlife Management Authority, responsible for dealing with human-elephant conflict, are alerted and can take pre-emptive action to drive the elephants off before harming communities or their crops. 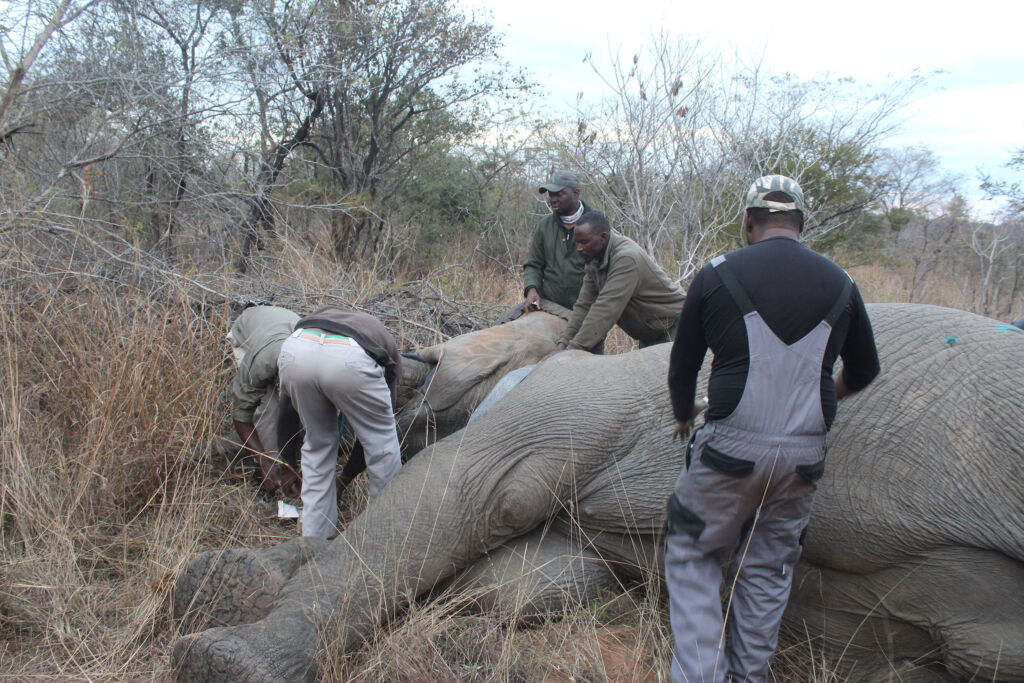 This collaring process is no small enterprise, either logistically or financially. Each collar costs R40 000 a piece, for starters, and weigh 15kg, but Makumbe says that to get scientifically valid data, eight to 10 elephants are required to be collared. They have to be darted first, and trying to reach this number has proved difficult. They have managed to fit collars to six elephants so far, however five dropped off. Makumbe says two of these collars were refurbished and fitted to another three bulls, so currently we have three individuals providing data. A further two collars are being refurbished, and two more are to be pruchased. He hopes that by the end of the year they will have seven collars fitted and operational.

Researchers will work with communities who will report all elephant damage incidents. The implementation of the programme will be facilitated by the local chiefs and headmen. “We can bank on them,” says Makumbe. “The chiefs understand the problem better than someone in an office. They live in the community affected, and so deal with complaints every day. They will therefore be supportive of this initiative. Chiefs are also respected in communities, and this work will assist communities in designing appropriate mitigation measures. The Parks and Wildlife Management Authority will take it from there.”

Makumbe is excited at the prospect of data been used to combat conflict. It will however be some time before the research yields results. The project is already in its second year, and Makumbe is expecting the first set of results. He is spurred on, though, by the knowledge that defusing human-elephant conflict is important not only for community safety and food security, but for the very future of conservation in Zimbabwe. 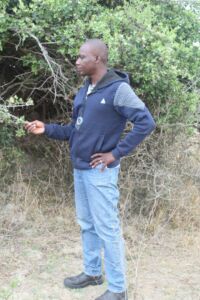 Peter Makumbe Bio: Peter Makumbe is the Research Manager at Shangani Holistic (a cattle and wildlife ranch in Zimbabwe) under the Oppenheimer Generations Research and Conservation. Peter has interests in biodiversity conservation especially in human-dominated landscapes, human-wildlife coexistence, wildlife behaviour, ecosystem function and resilience. He believes that communities should benefit from the natural resources within their landscape through sustainable utilization. Peter is currently studying towards a PhD in Nature Conservation at Nelson Mandela University, South Africa. His research focuses on the migration patterns of elephant bulls in human-dominated landscapes.

Shangani Holistic pioneers a holistic management style to facilitate sustainable interactions of people, wildlife and cattle and subscribes to the ‘Triple Bottom Line’: People, Planet and Profit. It is a data-driven entity which believes in the power of research. Our mandate is to fulfil Oppenheimer’s Creed “We are committed to leaving our world better than how we found it, and to building sustainable and prosperous societies. We will do this through focussed engagement across the land, people, and cultures we touch.” As Shangani Ranch research we aim to manage an ecologically regenerative, ecologically balanced wildlife and cattle ranch, integrated with the values of the Oppenheimer family in a financially sustainable manner while contributing positively to the community in which we operate. We strive to create an environment that promotes the continuous transfer of knowledge, information, and skills. Our research focuses on the natural sciences particularly wildlife ecology, livestock science, ecosystem functioning, landscape ecology and anthropology.