In with the old: taking the long view when restoring grasslands

Grassland restoration has often been trampled underfoot in the rush to score carbon credits by planting trees, and undermined by the assumption that degraded grasslands are easily fixed because they are thought of as relatively young habitats.

An article in Science by Elise Buisson, Sally Archibald, Alessandra Fidelis and Katharine N. Suding argues strongly that restoration interventions should be long-term, and benchmarked by an understanding of the complexities of ancient grasslands. Such spaces have been built over centuries into ecosystems of high species diversity, whose resilience to climate change lies mostly out of sight,  below the ground. The authors highlight that land conversion – to cultivation or plantation forestry – is irreversible: i.e. it is highly unlikely that these systems can ever be restored to their old-growth state. Therefore they argue that conversion should be avoided wherever possible, but also set out some practical restoration options for the Earth’s grassy ecosystems that use knowledge of the unique needs of their biodiversity to promote old-growth characteristics.

The article, titled: Ancient grasslands guide ambitious goals in grassland restoration, was published in a special edition on Grass of the prestigious journal, Science, on 5 August 2022.

Grasslands constitute almost 40% of the terrestrial biosphere, and on top of providing habitat for a great diversity of plants and animals, contribute to the livelihoods of about one in eight people in the world. Nevertheless, they are imperilled by massive land conversion for intensive agriculture and silviculture (forestry), mining, woody encroachment and species invasion “driven by altered fire and grazing regimes”.

Land-use changes to, for example mining or cultivation, and altered disturbance regimes, put belowground structures (e.g. bud banks) at risk of degradation sufficiently serious to push grasslands over a threshold beyond which restoration may be difficult, or take decades to achieve. This makes it imperative to protect old-growth grasslands, “particularly from the threats that affect belowground processes and structure, as we cannot rely on restoration to guide complete recovery after such degradation,” say the authors.

Numerous studies across six continents show that secondary grasslands may take at least a century, “and more often millennia, to recover their former species richness”. Less is known about how long it might take for belowground soil and structure development, but it is likely to follow the same timeline.

Research is vital in establishing the extent of the problem and the best way to resolve it. Scientists at the University of Witwatersrand’s Future Ecosystems for Africa programme, funded by Oppenheimer Generations Research and Conservation, are researching three key questions regarding grasslands restoration: 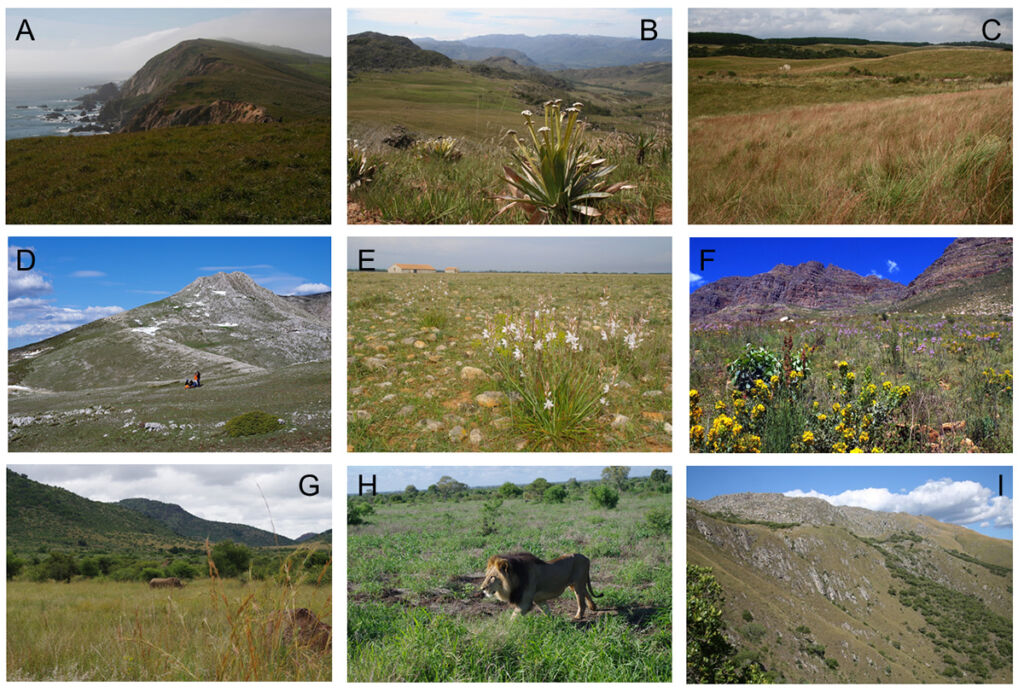 Buisson and her colleagues stress in their Science article that that one initial period of active restoration is not sufficient to guide development towards an old-growth state, and that iterative processes should be embarked on.

Many grasslands globally co-evolved with fire and grazing animals and have been structured by feedbacks among disturbance, vegetation and belowground soil development. Re-establishing broken feedbacks in cases where fire has been suppressed or grazer communities have become depauperate can have rapid and beneficial impacts on biodiversity and ecosystem services. Sometimes novel interventions are required to re-initiate feedbacks, and the authors give examples where fire has been used as a tool to recreate grazing habitat, and livestock grazing is managed to foster habitat for other large mammalian herbivores. As the system recovers, interventions can be amended.

Woody encroachment or exotic herbaceous species invasion can threaten grassland integrity. Once the grassy understory has been knocked back to such an extent that it cannot carry a fire or support grazers, woody encroachment becomes difficult to reverse. This requires replanting of herbaceous vegetation together with the initiation of a disturbance regime for recovery feedbacks. To push back woody encroachment, land managers have sometimes resorted to cutting, herbicides, ploughing up trees and extreme fires.

In the case of invasive grasses, they can maintain disturbance regimes which are not conducive to the belowground complexity of old-growth systems. There can under certain circumstances be a dominance in the seed bank making it difficult to re-establish long-lived natives. Seed-enhancement technology and ordering the reintroduction of plants provide a strategy to influence species dominance in the early stages of restoration.

How does one speed up species turnover to restore an old-growth state?  Grasslands are often restored by sowing seeds. However, seeding fast-growing species may impede long-term success due to a lack of resilience and by excluding longer-lived species from restoration.

Once belowground structures are gone, not enough information is available on how to restore them, emphasising the importance of preserving them in the first place. There has been some success in broadening types of species through topsoil transfer and through vegetative transfer. Techniques to speed up the establishment of bud banks are promising, but are in their infancy.

Climate controls the distribution of grasslands, and climate change may require a shift in restoration trajectories depending on species best able to tolerate future conditions. Decisions may be influenced not only by which species to have at a given site, but also functional diversity, soil structure and the belowground component. This will allow the system to recover from an extreme event, as the presence of a viable bud bank and underground storage organs ensures the resilience of the system. In spite of the difficulties climate change presents to restoring old-growth grasslands, the authors expect that prioritising belowground complexity and functional diversity should enable resilience while maintaining the character and services that embody these systems.

The authors warn of the hard road ahead, littered with challenges, but are confident that viewing grassland restoration as assembly towards old-growth characteristics with unique biota and belowground complexity, “will enable us to achieve ambitious restoration goals for Earth’s grassy ecosystems”.

In conclusion, they “urge conservation initiatives to safeguard against the conversion of old-growth grasslands for treeplanting or tillage agriculture, to maintain our ancient biodiverse grasslands with appropriate disturbance regimes, and to emphasise the long-term restoration of grasslands in efforts to restore Earth’s biodiversity”.