Large herds of hungry domesticated cattle are often seen as a threat to the future of Africa’s shrinking wildlife conservation areas. But, could it be that cattle and pastoral communities are actually part of the solution?

That’s the big question South African-born ecologist Dr Liza (Elizabeth) le Roux hopes to find answers to during a major research programme that will explore the complex interactions between plants, animals, cattle dung and people. It’s a critical question in the Anthropocene Era, a human-dominated epoch in which the remaining fragments of undisturbed nature face relentless pressure from economic development and changing climate patterns.

Le Roux’s love for wild spaces was sparked as a girl during bushveld holidays north of her home in Pretoria – later strengthened as an ecology student who spent two years living in a caravan in the Kruger National Park.

Then she spent a further two years living out in the bush while studying for her PhD in the Hluhluwe-iMfolozi game reserve in Zululand. Through experience and interaction with scientists from across the world she gained a deeper understanding of the many complexities and values of the natural world..

Over time, Le Roux and fellow ecologists have become increasingly worried about the long-term future of Africa’s isolated protected areas, many of which are now seen as conservation “islands” stranded in vastly altered landscapes.

“There will always be people in nature. So if we are to save a significant amount of viable wild spaces, our focus should not be on wildlife, but also on people . . . Otherwise, it’s just a matter of time before these areas shrink and shrink and eventually disappear,” says Le Roux, the 2022 recipient of the US $150 000  Jennifer Ward Oppenheimer (JWO) Research Grant that was established four years ago to assist early-career scientists to develop scientific solutions aimed at addressing African problems.

Her winning research proposal, entitled “Cattle corridors: Aligning ecological processes and local livelihoods” was among 332 applications, from young African scientists that impressed the  JWO Research Grant expert panellists, made up of representatives from Oppenheimer Generations Research and Conservation and Philanthropies, as well as well as external experts representing various scientific disciplines .

In very simple terms, her three-year research programme will examine whether the movement of cattle and pastoral communities in Africa should be viewed not as a problem, but rather as a possible solution towards reconnecting and integrating fragmented conservation areas.

How does that work?

As things stand, African protected areas are becoming isolated with wildlife populations increasingly confined and fragmented. This means that many species – including plants and insects – have limited opportunity for movement and reduced genetic diversity resulting in genetic bottlenecks.

To address the risk of genetic in-breeding, some wildlife managers have intervened by shifting certain endangered animal species to other reserves using a meta-population strategy.

For example, individual cheetahs are captured and moved between reserves on a regular basis to guard against genetic in-breeding.

Le Roux notes that genetic variation is essential if species are to retain their long-term potential to survive, especially in an era of changing climate patterns.

While it is possible to move cheetahs and even elephants on a regular basis – how do you move thousands and thousands of species of insects, plants, grasses and trees which all make up the complex tapestry of nature.

This is where the cattle come in.

In many parts of Africa there are still many ‘semi-natural’ cattle rangelands inside or amongst protected areas.

Though they are not formally protected and are often heavily impacted by high cattle densities and human influence, Le Roux still believes they have the potential to make very meaningful contributions to conservation by creating connectivity “corridors” between protected areas.

It is these rangelands that provide large landscapes for movement and dispersal. The cattle themselves also play a role, by trampling the earth and moving large amounts of biological materials over relatively long distances through consuming, transporting, and redistributing nutrients and plant material.

In doing so, the cattle corridors maintain stepping-stones or bridges for certain wildlife species, plants and insects to move between the conservation islands.

However, as traditional practices change, more fences are going up in many of the old rangeland areas of the Maasai Mara in Tanzania and elsewhere.

“There is a tendency to say ‘This side for animals. That side for cattle and people’, because there is a lot of conflict over grazing rights,” says Le Roux.

The outcome is that traditional pastoralist societies are increasingly being pushed to intensify or diversify their income, leading to unsustainable cattle densities, a shift towards farming crops or putting up fences for exclusive access to grazing resources.

This means that the capacity of traditional rangelands to provide ecological connectivity is deteriorating fast and cannot be reversed without significant legal, institutional and policy support to maintain rangelands in a semi-natural state.

“I believe we must relinquish the ‘either-or’ proposition of wilderness vs rangelands and work towards the protection of both, for the benefit of people and wildlife,” she says.

“Personally, I think there are certain benefits of traditional ways that we have not appreciated . . . We have to think harder about integrating people and nature and look towards a gradation of landscapes. African communities have a lot to teach the world about ways of living with wildlife.”

To test the hypothesis, Le Roux hopes to set up a large interdisciplinary and highly collaborative science programme to answer questions such as:

This will involve using camera traps to identify which species of wildlife make use of the cattle corridors or measuring the movement of nutrients and mineral elements (such as carbon, calcium or potassium in the soils) using portable X-ray fluorescent (XRF) analysers.

Though Le Roux is still mulling possible study sites in East Africa, Zimbabwe, Botswana and South Africa, she will employ three African PhD students, all of whom will spend at least two months at Aarhus University to write up their theses.

The students will also attend at least one international conference to broaden their experience and build new networks with senior scientists from Africa and across the world. 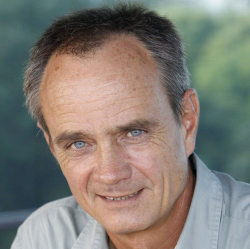