Tipping Points Ep 4: Paying the price – Is a conservation economy worth it?

There is a need to unlock fresh opportunities in Africa; to develop wildlife economies that conserve wildlife, ensure community well-being, and sustain ecological processes well into the future.

But how can we successfully – and more importantly, equitably – include economic dimensions in conservation projects? Can we break the historical pattern of exclusion where conservation efforts were driven by the elite, for the benefit and enjoyment of the elite with little attention paid to sustainable development and welfare of indigenous African communities? And, above it all, is it worth the effort amid all other challenges Africans face?

In our search for answers, the Oppenheimer Generations Research and Conservation invited three seasoned experts, all pioneers in the field, to help us get an improved understanding of the bigger picture.  They are Dr Sue Snyman, director at the African Leadership University School of Wildlife Conservation, Michael ’t Sas-Rolfes, an accomplished conservation economist, and esteemed wildlife scholar, Professor Brian Child.

Watch the webinar recording here on the OGRC YouTube channel.

Africa’s advantage
Paying the price: Is a conservation economy worth it? “My short answer: Yes. Absolutely,” Dr Sue Snyman, responded. But how best to unlock its potential to address challenges along the way is where the tipping point lies.

Challenges include institutional failure, mismanagement, and skewed priorities. And judging by the way the world has been working over the last few decades, it seems many people have forgotten that economies, livelihoods and well-being ultimately all depend on the world’s precious asset: nature.

Snyman said the wildlife economy covered all life forms, from fungi all the way through to elephants. Importantly, it must always align with conservation objectives and lead to sustainable growth. Despite many opportunities to develop wildlife economies, globally economic growth has come at nature’s expense, said Snyman.

She displayed a graph showing that while capital (machinery, tools and buildings use to produce goods and services) has increased more than 100% and human capital (skills, knowledge, and experience) has risen by nearly 20%, natural capital (the world’s stock of natural resources) has fallen by nearly 40%.

But this curve could be changed, said Snyman. Conservation and development could work together as a strategic asset for the benefit of current and future generations. “It is a key growth opportunity for Africa,” said Snyman. “Unlike other continents that have virtually depleted their natural capital and are now rewilding, Africa still has spectacular fauna and flora.”

The largest of the key enterprises that make up Africa’s wildlife economy is traditionally eco-tourism; the current value of the wildlife safari industry being estimated at between USD 12,4 billion (direct) and USD 42,9 billion (total). Then there is hunting; ranching; wildlife estates (which are relatively new); film and photography (which has huge potential but is not currently being utilised); non-forestry timber products; and carbon.

Snyman stressed that most wildlife hunting in southern Africa was not for trophies but for venison (game meat) for local consumption. In South Africa alone in 2019, while international hunters injected USD 158 million to the economy, local hunters contributed USD 875 million, over five and a half times as much. Actual wild meat sales in South Africa generate about USD 56 million annually.

But the largest sphere of all on Snyman’s graph was “not yet utilised potential”, representing activities which could either be distributed around the existing wildlife enterprises or other new innovative activities. Snyman said that in 2018, Africa had received only 5% of worldwide tourism arrivals, leaving much room to grow this sector using the wildlife safari industry as a platform.

And Snyman is confident it will happen. Stakeholders simply need to illustrate the value of this unused potential in ways that result in investment and, ultimately, a shift in the curve. 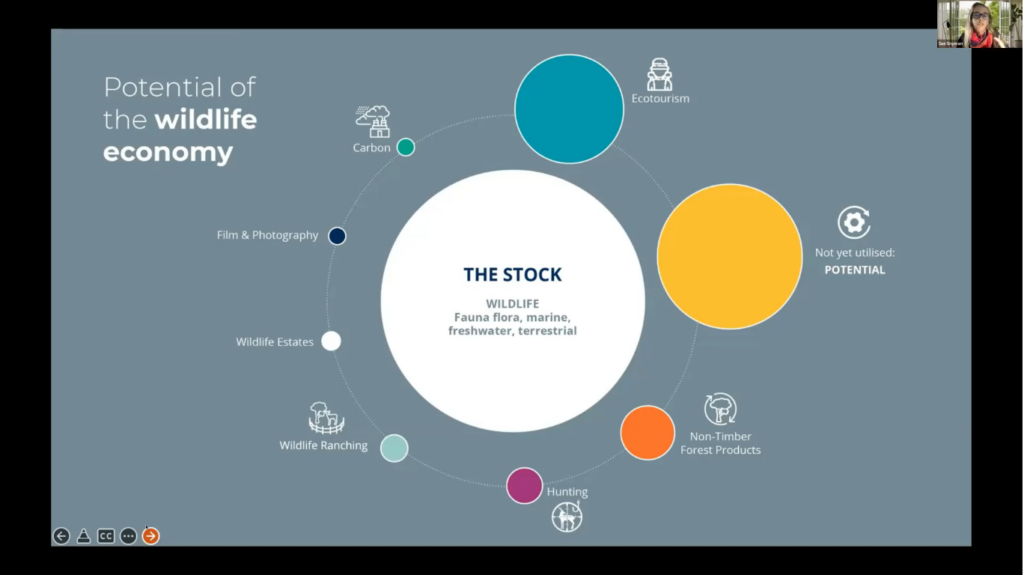 Dr Snyman presented a visual depiction of the key enterprises that make up Africa’s wildlife economy.

Ownership
In his presentation, conservation economist Michael ’t Sas-Rolfes, elaborated on the need to promote collaborations to develop the wildlife economy, with ownership being a key factor. Put simply, people who have ‘skin in the game’ not only care for the land and conserve its wildlife, but also find ways to generate revenue from it.

He referred to a rhino case study which showed wherever rhino conservation and anti-poaching efforts were left in the hands of the state, it had failed. He cited Kruger National Park as an example where the state was failing to protect its rhino populations, whereas private game reserves were.

In terms of economic value, ‘t Sas-Rolfes said that, roughly speaking, up to USD 350 million income a year had been generated by trade in rhino horns and other body parts over the past decade, “but almost exclusively by people we would regard as ‘criminals. It has not gone back into conservation.”

This leads to the question as to who actually benefits from the rhino horn trade ban – those conserving rhinos or those killing them? And who would benefit if the trophy hunting ban, now lobbied for internationally and in South Africa, was approved? asked ‘t Sas-Rolfes.

Above all, whose values and priorities count when making such decisions? Answering those questions, said ’t Sas-Rolfes, was not just about economics, but moral and ethical considerations too.

He concluded that an effective wildlife economy needed to be diverse, sustainable, and adapt to different and diverse approaches arising from decentralised (bottom-up) governance, not a top-down approach in order to be resilient in a changing world.

Land use
Professor Brian Child went deeper into the land-use issue in ways that both commercial and subsistence farmers would relate to.

Farmers are hungry, said Child. “And it’s going to get worse . . . Many of our grandparents were farmers. They are not now because it’s not viable.” Furthermore, agriculture would not help solve major issues of climate change, soil degradation and deforestation in Africa.

Globally, said Child, the world has ‘very bad’ wildlife conservation policies. “It has lost 82% of its wildlife in the past 50 years – a disastrous situation,” Africa, on the other hand, was the only continent with more than 20 wildlife species and which can sell a diverse wildlife product.

He said livestock and crop farming had wiped out wildlife populations on vast swathes of land. Then, after wildlife experts in Namibia challenged the Southern African colonial policies, ownership of wildlife was given back to landowners and farmers. The result today was that wildlife, including rhino, was increasing very rapidly in southern Africa, and in ways that could benefit growing numbers of people, including many previously excluded from the conservation economy.

Referring to a map of Africa, Child said: “Just look at all this space – this green unproductive land – we have got to develop this economy.” Yet people in these communities were making less than a dollar per hectare, said Child. In comparison, Namibian game ranches are these days making between USD 40 – 50 per hectare. “One ranch that has hunting and tourism on the same land, makes USD 200 per hectare,” said Child.

He said while the Kruger National Park created more than 36,000 jobs and added USD 807 million to South Africa’s GDP each year, these tourism activities were closely clustered around a very small area adjacent to the park. “Tourism is really good at making a lot of money and creating a lot of jobs in really small areas. It won’t conserve Africa’s wildlife. That is why we need hunting and wildlife trade,” said Child.

But “sanctions” on wildlife trade, especially rhino horn and ivory, were imposing “opportunity costs” of about USD 1 billion – “enough to manage all the protected parts in Africa”. He put trophy hunting’s value to Southern Africa at half a billion dollars, with local farmers reaping about USD 200 million. “It’s paying for and conserving about 60%-80% of the wildlands in the region,” said Child. “But there is a target on its back.” “Important markets are being closed down by international people, with a huge amount of resentment from the very people who are looking after wildlife. Here in Namibia, people are calling them sanctions,” said Child.

Responding further in the Q&A session, Child said the debate on what is bad and good about wildlife trade and hunting needs a lot more nuance. “At the moment it is being debated by liberal westerners who are drinking cappuccinos in the capital cities of the world without the inputs of local people. That is not going to result in sustainable solutions. Local people are quite aware of issues of cruelty and the beauty of the environment. If we simply trust the local people (to conserve rhino for example), I think a lot of these problems would go away.” 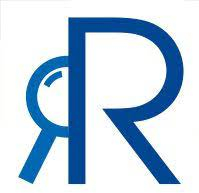 By Tatjana Baleta
Conversations from Taste of Game: Is game meat the next game changer?

Game meat is increasingly being publicised as a sustainable food choice that can ensure wildlife conservation while also injecting funds into the economy and providing opportunities for community livelihood creation.

Read More
By Roving Reporters
Tipping Points Ep 4: Paying the price – Is a conservation economy worth it?

There is a need to unlock fresh opportunities in Africa; to develop wildlife economies that conserve wildlife, ensure community well-being, and sustain ecological processes well into the future.

Read More
By Yves Vanderhaeghen
Game reserve or cattle ranch? Why not both?

Looked at one way it’s a game reserve. In another, it’s a vast cattle ranch. Or prime rangeland. Whichever way one looks at it, Shangani Holistic, in the Zimbabwe midlands, lives up to its name, fusing all the elements of its ecosystem so that each flourishes to the benefit of the others.