Down with the doom: time to crack on with conservation

Time is running out, says Dr Duncan MacFadyen, head of Oppenheimer Generations Research and Conservation. There’s little wilderness left and climate change may be nearing a point where it will be too late to stave off mass extinctions. Yet, we continue to consume natural resources quicker than the Earth can heal itself.

Berger, a world-renowned Wits University paleoanthropologist, was in many ways the odd man out at the conference in Midrand, attended mainly by conservation researchers, NGO’s and environmentalists. Berger’s business is old bones – finding them and unlocking their ancient secrets; most of the more than 380 delegates are immersed in the here-and-now worlds of biodiversity, landscape ecology and wildlife economies.

Drawing on his discoveries at the Cradle of Humankind in Gauteng, Berger sought to inspire and energise, telling how his own discipline had gone from being  “devastated by scepticism” to making “transformational discoveries” in recent years.

It was a message not lost on his audience, who have their work cut out in halting biodiversity loss, climate change, and conserving wildlife.  At the same time, Africa urgently needs economic growth and development – a complete facelift of sorts. How to do this in a way that conserves nature rather than erodes it was the key question arising. These important developmental pathways which need to strongly support nature.

Mitigating climate change ranked high on the agenda too, as did the dire consequences of dependency on coal to generate electricity.

Another big area of concern was the way African voices on climate change and conservation tend to be drowned out by what some refer to as “scientific imperialism”.

He warned that the muted voice of African researchers would lead to imposed conservation models that disregard African environmental knowledge.

Nolwazi Mbongwa, a practising sangoma and research assistant at the South African National Biodiversity Institute, put it more bluntly: “Conservation is not a colonist concept. It always existed in Africa,” she said.

This “helicopter science” betrayed “a shocking lack of understanding of ecological processes” in Africa, said Archibald, referring to her own work as a fire ecologist.

And in Africa itself, said Mbongwa, most traditional healers had a deeper appreciation for nature than what could be learned from books, but were largely ignored when it came to decision-making in the conservation sector.

This was also touched on by Minister Barbara Creecy, the Minister of Forestry, Fisheries and Environmental. In her keynote address, Creecy said more research was needed into the role and value of indigenous and traditional knowledge in promoting biodiversity conservation in Africa.

She said the Oppenheimer conference could not have been more opportune.

“This audience understands more than others the crisis confronting our natural world and indeed the future of humanity as we know it. Climate change, biodiversity loss and pollution threaten the environment on which we depend and weaken our economic and social systems,” said Creecy.

“In the Western world conservation is all too often somewhat of a fiction … a Disney vision of the real world,” said Oppenheimer. “Some very unpleasant things happen in the world and in the conservation areas where we operate. You have to be able to face up to those and make that part of your research and deliberations.”

But, he added, it was also important to know that humankind could not bend nature to its will.

“After all, the real world has been out there longer than any of us … Because it has been there so long, it has been successful, and we need to learn from that,” said Oppenheimer.

In his opening address, conservationist, corruption-buster and government turnaround specialist, Mavuso Msimang, referred to predictions that a 4°C increase in global temperatures (relative to pre-industrial levels) could cause about a 12% decrease in the African continent’s overall GDP – “a decline we simply cannot afford.”

“But we can stop this trend and safeguard our economy if we embrace nature-based solutions,” said Msimang.

He cited a 2020 World Economic Forum report stating that a transition to a nature-positive economy could generate $10.1 trillion in business value every year and provide about 400 million new jobs.

“If Africa chooses to unlock the power of nature by expanding and improving management of protected areas, it will create unparalleled business value for the continent,” said Msimang.

The other panel session streamed live from the conference, was titled: “Post-growth or green-growth – alternative development pathways for Africa”. It grappled with whether continuous economic growth would lead to sustainable solutions, or whether such solutions can only be found by changing the way the global economy works.

The panel members were Jonathan Oppenheimer, Awande Buthelezi, Dr Neva Makgetla and Vasna Ramasar. They warned that there was a link between economic growth and environmental disaster, and that in Africa – with one of the most unequal societies in the world – it is going to be a tough problem to solve.

Makgetla, a senior economist at research institute Trade and Industrial Policy Strategies, stressed that people in the poor communities lack the resources that give the rich resilience, and that radical change was required if a green-growth economy was to become a reality.

This, she said, required “changing every aspect of the economy, but also society in a whole variety of ways.”

“What we can’t do is say to the majority: you have to sacrifice for the good of the environment. In a democracy that doesn’t work. They also have to see the benefits. It can’t always be just the environment. That’s a way of saying: ‘No, you can’t have what other people have’.”

Describing this as “one of the most defining conversations of our time”, Buthelezi, a   researcher at the Co-operative and Policy Alternative Centre, agreed that new political and economic approaches were urgently required.

But far too little was actually being done, said Buthelezi, calling for fresh thinking “at the level of a wartime government”.

He cited warnings of the Intergovernmental Panel on Climate Change that failure to limit global warming to 1.5°C by 2030 will have far-reaching environmental and social consequences across the world — including, perhaps, a sixth mass extinction event.

And Africa was warming at twice the global average, added Buthelezi.

Amid this, the number of people in the world who were malnourished continued to soar, said Oppenheimer, warning of impending social unrest.

“So, we have to find this very, very delicate balance between, on the one hand, making use of our environment in a way that is sustainable for not only ourselves, but for nature and future generations, and ideally, creating the space for regeneration,” said Oppenheimer.

“If we fail to do that, one or other crises will kill us”, he said.

Ramasar, a sustainability science researcher at the Lund University Centre for Sustainability Studies in Sweden agreed that there was a need to change “economic organisation” as a whole, but stressed that growth should not itself be the primary objective.

While such discussions gave delegates plenty to ponder, a number of top scientific presentations got down to the nitty gritty of conservation conundrums and the fresh insights gleaned from the latest research.

In his presentation on managing elephant populations, University of Kwazulu-Natal zoology Professor Rob Slotow, said reserve managers often agonised over whether a particular park had too many or too few elephants. Instead, he said, they should be looking at whether natural ecosystems in protected areas were functioning properly to support biodiversity, and sufficiently diverse and robust to bounce back from major disturbances such as storms, drought, heatwaves, and diseases.

Another presenter, Professor Graham Kerley, director of the Centre for African Conservation Ecology at the Nelson Mandela University, observed that there were nearly 240 000 protected areas globally, yet we have a growing number of endangered species. His presentation, The Protected Area Paradox and Refugee Species Concept also cautioned against conserving species in the wrong places with inadequate space, “all in efforts to tick a box that we have conserved areas.”

Professor & SARChI Research Chair in Ecosystem health and biodiversity at UKZN, Professor Colleen Downs, looked at how various species such as the crowned eagle, vervet monkeys and chameleons were adapting to urban environments and the importance of “green cities” serving as lungs to maintain biodiversity. Downs, who won the prize for the best conference presentation, also showcased work by a diverse group of young scientists, representing the significant capacity building of the next generation of researchers.

Tech savvy solutions to find new funding flows for conservation came under the spotlight in a presentation from the executive director of the Kenya Wildlife Trust, Dr Irene Amoke, entitled Changing the conversation around conservation.

And evolutionary biologist, Professor Tim Clutton-Brock, gave a fascinating account of his studies on the impact of global warming on two very different animals: deer and meerkats. In a nutshell: while deer do well, it’s misery for meerkats. Clutton-Brock hopes that the wealth of data he has collected will have predictive value, providing lessons on mitigating the effects of climate change and biodiversity loss.

In a recorded Zoom chat interview with Roving Reporters after the conference, MacFadyen said while there was a touch of gloom and doom about the conference, the overriding “take home” message was that there was a lot that can be done to build wildlife economies into a much-needed cornerstone of prosperity in Africa.

And he heaped praise on young, emerging African scientists who featured prominently at the conference, helping shape debates.

Among them was Mthokozisi Moyo, a PhD student at the Global Change Institute at Wits University, who presented the findings of his research into the influence of seasonal rainfall on plants and animals in Miombo woodland. ((please check with we got this right, Esther.)).

“It was really insightful, well-delivered and could have application elsewhere – the Cape Fynbos or Sahara Desert,” said MacFadyen.

He also applauded UCT PhD candidate and ornithologist, Merlyn Nkomo, for reminding delegates that it was not that long ago that national parks were fortresses put up to “protect” nature from the black communities that had lived in harmony with it for centuries.

Nkomo has, since 2020, been very vocal about what she terms the Achilles Heel of Conservation – detailing the challenges faced and the fact that people of colour are not sufficiently recognised in the conservation of nature and wildlife.

MacFadyen said Nkomo’s presentation had also brought into sharp focus the challenges she had personally faced as a black woman in the conservation sector.

This had, once again, said MacFadyen, highlighted the need to turn the page on that past and bring fresh voices into the conservation sector – in much the same way that palaeoanthropologist Lee Berger had recently brought in young African fossil finders into “the greatest age of exploration”. 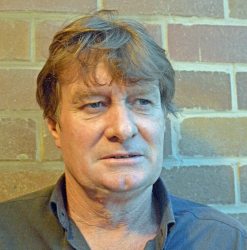