Conversations from Taste of Game: Is game meat the next game changer?

Game meat is increasingly being publicised as a sustainable food choice that can ensure wildlife conservation while also injecting funds into the economy and providing opportunities for community livelihood creation.

This year’s Taste of Game was held in May at Victoria Falls, Zimbabwe. Hosted by Oppenheimer Generations Research and Conservation (OGRC), this event sought to “profile game with the consumer, and encourage a greater demand for healthier, GMO-free, low-fat protein.”

Game ranchers, researchers, Zambia and Zimbabwe’s Ministers of Tourism, journalists and influencers joined OGRC for dinner and discussion about the wildlife economy, and game meat in particular. The wildlife economy “uses wildlife, plants and animals (marine and terrestrial), as an economic asset to create value that aligns with conservation objectives and delivers sustainable growth and economic development.”

While much discussion centred on the benefits to health and palate of the eland, kudu, warthog and impala sourced from Zimbabwe’s Shangani Holistic ranch and expertly prepared by Michelin star chef, Jan Hendrik van der Westhuizen, it was also an opportunity to explore the misunderstandings and obstacles holding game meat back from reaching its full potential in the wildlife economy. Obstacles discussed included issues of accessibility, the misconceptions associating ranched game with poaching and unfamiliarity with cooking techniques.

Is game meat a new trend?

“The biggest myth about game meat”, said Prof. Kennedy Dzama, “is that it’s new.” Dzama is Vice-Dean of the Faculty of AgriSciences, Stellenbosch University, a board member of the African Wildlife Economy Institute (AWEI) and an award-winning livestock geneticist. “Africans always had interactions with the environment and wildlife. We are trying to bring back what happened years ago so that everyone sees the benefits of these things,” he added.

Other guests shared Dzama’s perspective. Dr Tariro Kamuti, a research fellow at AWEI, remembers how he grew up in Kanyera Village in northern Zimbabwe, eating protein not only from livestock, but also from wildlife. “So for me, to find myself eating game is not something that is mythical,” he said.

“I think we are working with the assumption that what we have right now is the normal situation – where we find food in the shops,” added Kamuti. “The greater proportion of Zimbabweans rely on subsistence – growing and obtaining their own food – and part of this is accessing meat. But, according to the law, if they do this they are regarded as poachers,” he said. 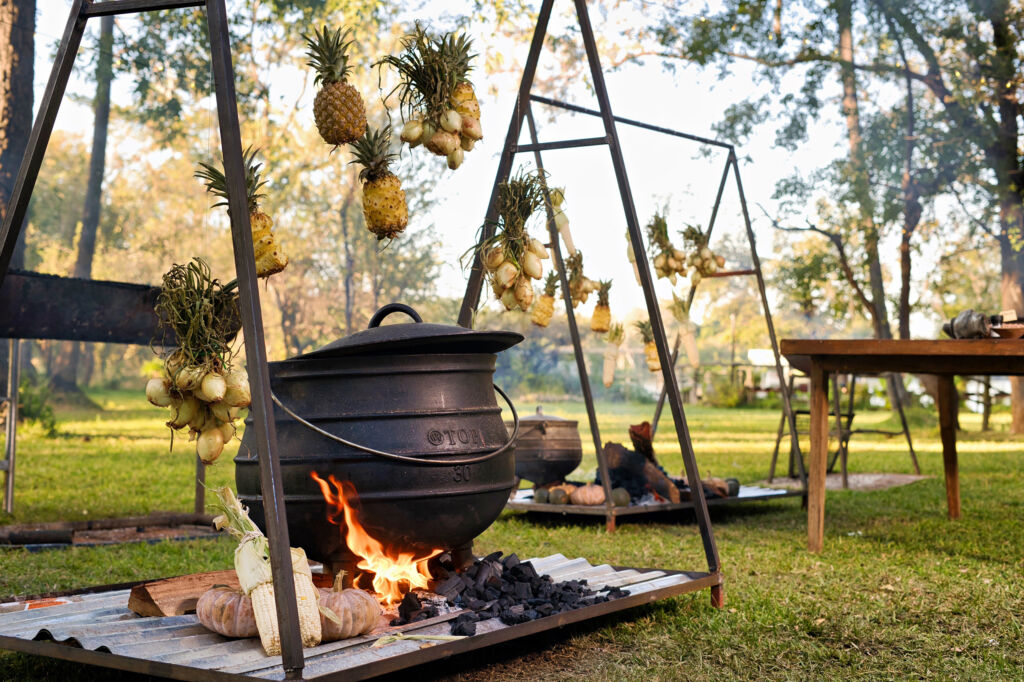 Why aren’t more people eating game meat? Guests pointed to a history of colonial exclusion that has granted an elite few access to wildlife resources while barring others behind fences.

“Game has been excluded from people’s diets because of the management system that has been in most African states due to the colonial setting; so whoever goes to get the meat is a poacher” said Ranga Huruba, Head of Operations at Shangani Holistic. “People haven’t had access to legal meat being sold, so there is an illegal bush meat trade.”

Conservation administration policies introduced by the Victorians in the 19th century in response to the decimating effect their sport hunting was having on African wildlife deemed sport hunting acceptable, but not the subsistence hunting African communities had been practicing sustainably long before the arrival of colonists. These policies still influence issues of ownership and modern regulations that dictate how people relate to the environment in much of Africa today.

Peter Makumbe, Shangani Holistic’s Research Manager, agrees. “There is a misconception that people don’t like to eat game meat, but they do. It’s just that the resource has been locked up. People have been eating game meat for a long time, and there has been a high demand for game meat. The problem is accessibility… We need to break the fortress we have created.”

Although largely legal in central and western Africa, wild meat hunting is illegal or heavily restricted in many east and southern African countries. Access is generally controlled through legislation and permitting systems, although the exact mechanisms and accompanying legislature differ across countries. Kenya, for example, has banned commercial hunting since 1977. “I think the regulations drive a lot of the behaviour,” mused Julie Cheetham, Sustainability at Oppenheimer Generations. Traditional hunting – describing hunting by local communities with a history of hunting traditions (for example, the San communities of Botswana and Namibia) – is not always recognised by modern laws.

Shangani Holistic, with the largest cattle herd in Zimbabwe, is using their ranch to pioneer a holistic management style to sustainably manage cattle and wildlife in harmony with people. Along with their climate-positive beef, the ranch also manages its wild game consumptively, and works with the surrounding communities to understand the needs of small-scale pastoralists.

“At Shangani we don’t say ‘poaching’; it’s just ‘illegal hunting’,” said Huruba. “We should be making systems so ‘that guy’ can extract the wildlife for meat as well… At Shangani Holistic everyone is expected to hunt at some point, but let’s do it in a legal and sustainable way… Setting up butcheries with communities is one of the things we want to explore at Shangani Holistic.”

A 2021 report by the African Leadership University, State of the Wildlife Economy in Africa, states that the better regulated hunting activities are, “the greater the positive impacts in terms of conservation [and] socio-economic benefits” while illegal and unregulated hunting remains a driver of species loss and places high burdens on wildlife management agencies.

Ultimately, these issues are highly nuanced, and the situation in each context is a result of multifaceted drivers. There is a need for African countries to increase monitoring and research into these complex systems. 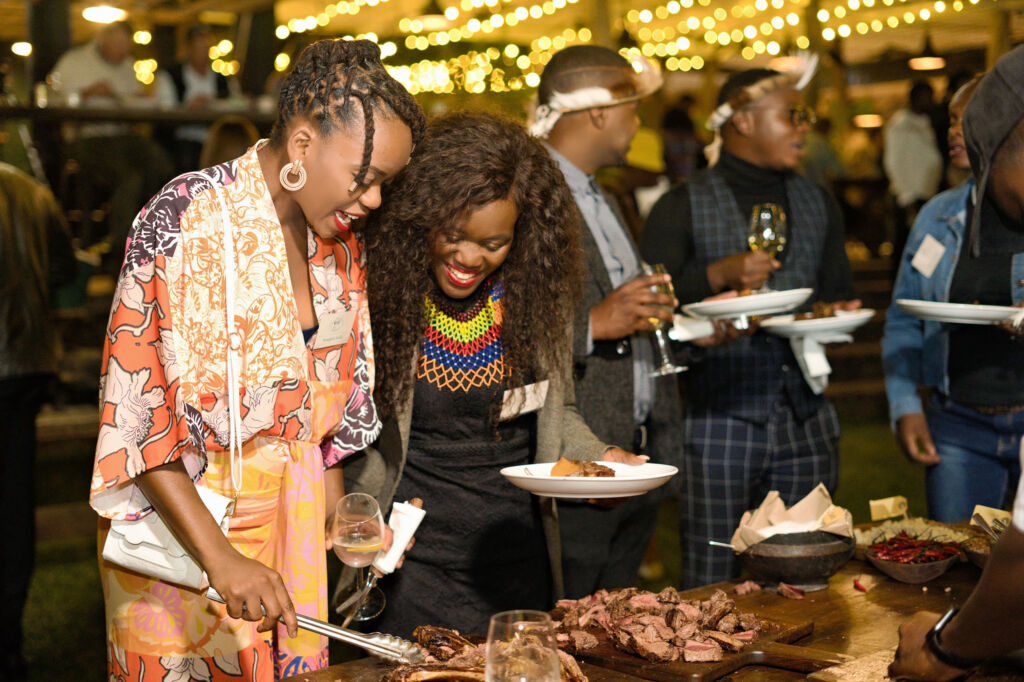 The key to deriving conservation and climate benefits from game farming lies in good management practices. Allowing game to roam freely within a ranch while monitoring the ecosystem closely and only harvesting in a sustainable manner can conserve natural landscapes and ensure persistence of species within that landscape.

“We’ve lost our way as humans – we’ve overindustrialised and forgotten nature,” Max Makuvise, Resident Director of Shangani Holistic, said. The ranch is optimistic that their holistic management model could be replicable and scalable beyond Zimbabwe’s boarders, marrying economic, conservation and social benefits while providing food security as well. “We’ll be fighting over protein in the next 50 years,” warned Huruba.

For van der Westhuizen, game meat is an opportunity to “bring sustainability to your plate”. All meat served at the event was sourced from Zimbabwe’s Shangani Holistic game ranch, and other ingredients locally in Victoria Falls.

Does it take a Michelin star chef to make a meal out of game? Game meat has a reputation as a tricky cuisine to prepare. “There’s a misconception that game meat is tough to cook, and people wouldn’t want to buy it [for fear that] they’ll waste money because they don’t know how to cook it,” said Cheetham.

Some view game meat as having a peculiar flavour. “It’s the different smells and the tastes… I think it’s something one has to get used to… almost like cheese,” laughed Shangani’s Holistic Manager, Mupenyu Mberi.

On the contrary, van der Westhuizen and other chefs praise game meat for its complex flavours, maintaining that, with a little learning, cooking game is easier than one may think. It’s also very healthy, being high in good fatty acids, such as anti-inflammatory omega-3, as well as iron and zinc and free from hormones and antibiotics. 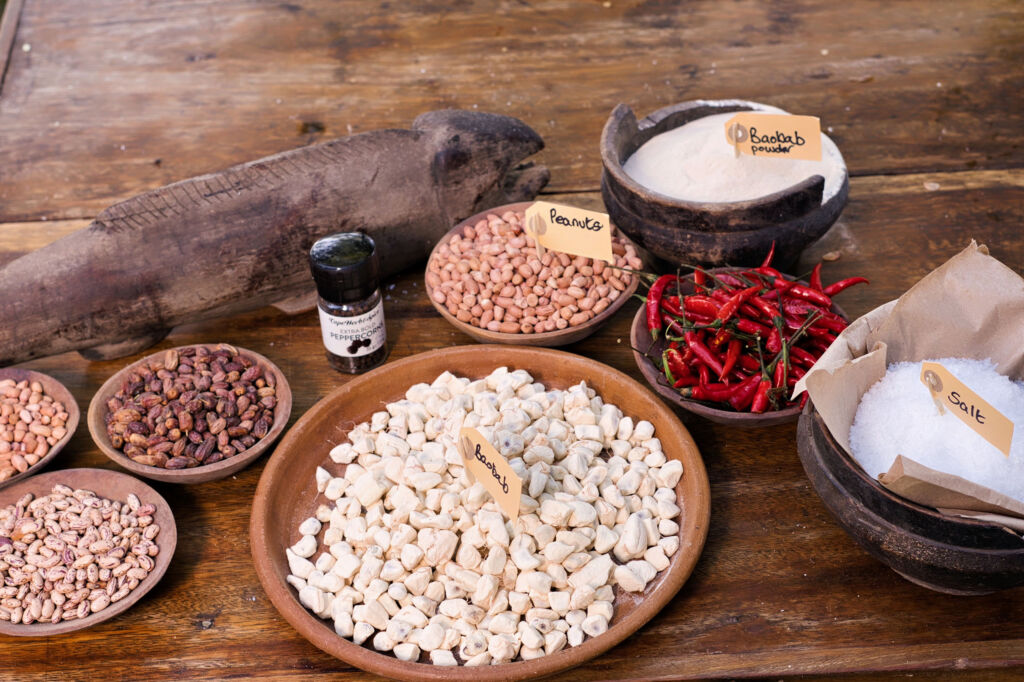 For many in attendance at Taste of Game, the game industry presents an opportunity to create equitable opportunities that honour African heritage while rectifying the injustices of the past. Game like impala, warthog, kudu, as well as other species including indigenous plants like the marula tree and insects like the mopane worm are iconic emblems of Africa that should be conserved, but also utilised in a wildlife economy.

“Mopane worms are part of us, and I am so glad they found their way onto the market,” said Kamuti after recounting the normalcy of insect consumption for many and commenting on the fact that prawns are available in supermarkets, but not locusts or flying termites.

“There’s a lot of misconception, and a lot deshrouding that needs to happen about what good game meat can do. There’s a lot of greater good that could come out of this industry, a lot of jobs that could be created, but the negative connotations are always focussing on hunting,” said Chanda Mwale from the Wildlife Producers Association Zambia.

The question then becomes how to create an enabling environment for this through game meat – something AWEI is looking into as a core theme of their research. Four principles have been highlighted as key to the success of the wildlife industry: Policy that supports sustainable utilisation and allows for the private ownership of wild animals, an enabling legislative environment, a principle of market-based economics directed toward sustainable management of wild resources, and lastly significant private investment in wildlife ranches and wildlife.

There’s more to wildlife economies than game meat alone, find out more find out more in our Tipping Points webinar series. Watch the May episode “Paying the Price – is the conservation economy worth it?”

Join the next Tipping Points webinar, “Connecting communities: How can we build inclusive wildlife economies?” on 30th June 2022. Register here.